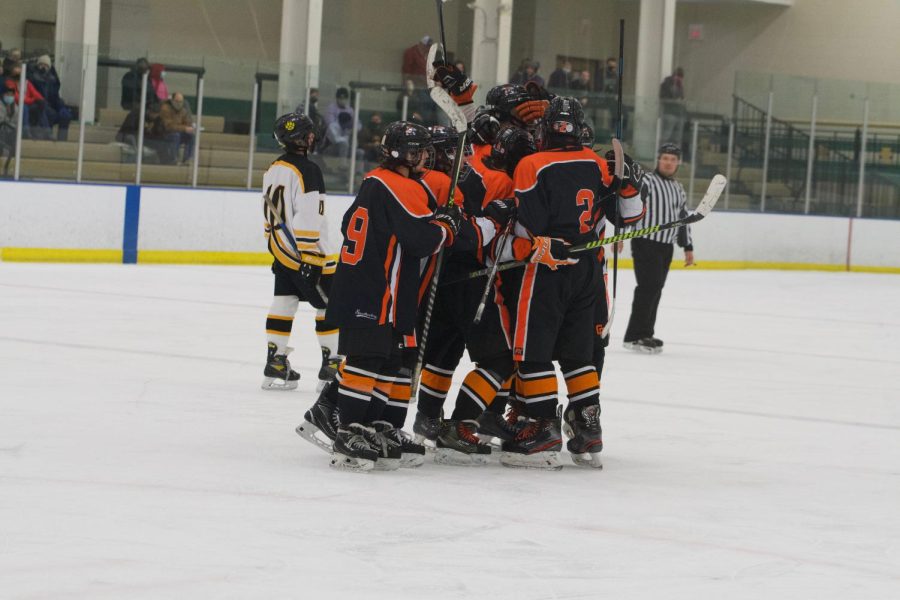 The small, but mighty, CFHS hockey team has been skating its way to victory after many successful games in the past couple of weeks.

Although the team only has 12 players, including one out with a broken collarbone, the team has demonstrated that it is a force to be reckoned with.

“We didn’t have the luxury of having a bigger bench,” said junior Henry Westendorf.

“We overcame this by conditioning over the summer and having workouts everyday when we don’t have practices.”

In addition to challenges on the ice, the recent uprising in COVID cases in the area has put somewhat of a strain on the team.

With the schools updated covid guidelines, it is harder to get fans out to The Pond, the team’s home arena located just down the street in Bainbridge.

“It has been hard to have less fans,” said junior Alex Newton.

“At the beginning of the season, we were lucky to have the Zoo at most of our games.”

Many students supported their fellow tigers at the beginning of the winter.

“The team was so good, and I loved supporting them.”

COVID hasn’t stopped the team from pulling out all the stops to beat their opponents.

“Other than having less fans, COVID hasn’t impacted us much,” said Alex.

“We have only had to miss one day and one game because of it.”

“Another challenge is getting ice space,” said Alex.

“Many schools around the area fight to use the Pond for practices, which means our practices can be random and change a lot.”

“We make the most of our practices,” said Westendorf.

“Practices are mostly conditioning and working on plays like our power play and penalty kill, which are two of our most useful plays,” said Westendorf.

Despite these challenges, the tigers have pushed though, which is shown by their multiple successes.

Freshman goalie Nathaniel Newton’s huge impact on the team, considering that this has been his first year playing High School hockey.

“At the beginning of the season, it was intimidating playing against people bigger than me, but now I have gotten used to it, ” said Nathaniel.

“My highlight game was our game against Cleveland Heights. It was my first highschool shutout and an overtime win against an undefeated team.”

Recently, the team got to celebrate their seniors Charlie Cimperman, Tommy Conway, Andrew Kirkpatrick, with a 10-0 win against Mayfield on senior night.

“It was surreal that it was already my turn for hockey senior night,” said Kirkpatrick.

“I’m super glad we got that win and I’m excited for the rest of the season.”

At the conclusion of their regular season, their record is 12-7.  The Tigers are now looking on to their playoff games, specifically the Baron Cup III Tournament.

For this year’s tournament, the team will face Nordonia on February 10th at the Brooklyn Rec Center.

“I’m looking forward to the rest of the season and next year,” said Alex. “I love our team’s atmosphere and our determination to play hard.”