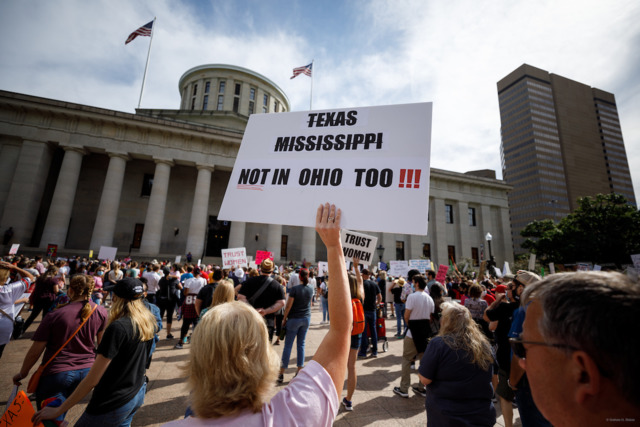 Image of protesters following the proposition of the bill. Photo courtesy Google Commons.

Ohio Republican legislators presented a new bill earlier this month that would restrict all abortions and the use of any tools that would aid in the process of having an abortion in the state.

The lawmakers plan to go farther than the Texas legislation presented in September of this year that is currently being challenged in the Supreme Court. Although Roe v. Wade gave the constitutional right to perform the procedure, many states have passed laws to challenge the 48 year-long precedent.

In a way, this legislation, as well as the law passed in Texas, ban abortion through a loophole in the orignial Supreme Court decision. Instead of directly banning and making criminals out of those who seek abortions, these laws incentivize citizens to file private lawsuits against them.

In 1973, when the Supreme Court ruled on Roe v. Wade, the court made the decision on the basis of the 14th Amendment, which protects a citizen’s privacy from the government. Now in 2021, new laws introduced by states like Texas and Ohio seek to pit citizens against each other in order to limit abortions. This emboldens private citizens to regulate abortion access themselves.

As advocates for women’s reproductive rights, we believe this law limits the bodily autonomy of women. This limitation forces women to proceed with pregnancies that can harm them in the future physically, mentally and emotionally. Those who are burdened with pregnancy following sexual assault or cases of incest must live the rest of their lives with a remnant of their trauma. Not only does this harm the women who are faced with difficult decisions concerning their own health, but also the children coming from an unwanted and unplanned pregnancy.

This is especially troubling considering these laws are coming from male-dominated legislatures. In these pro-life vs. pro-choice debates, both sides utilize personal anecdotes and stories to support their side. We feel that the Texas and Ohio legislatures fail to recognize the necessity for a woman’s privacy in her own health endeavors. This law motivates citizens to target and marginalize women.

If this was an issue concerning the regulation of men’s autonomy, then the proposed legislation would be out of the question. As a staff consisting of teenagers, we have come to understand that this legislation already worries younger generations. Legislatures consisting of non-representative members harm the generations that will come to live in the future that is passed in conjunction with this bill.