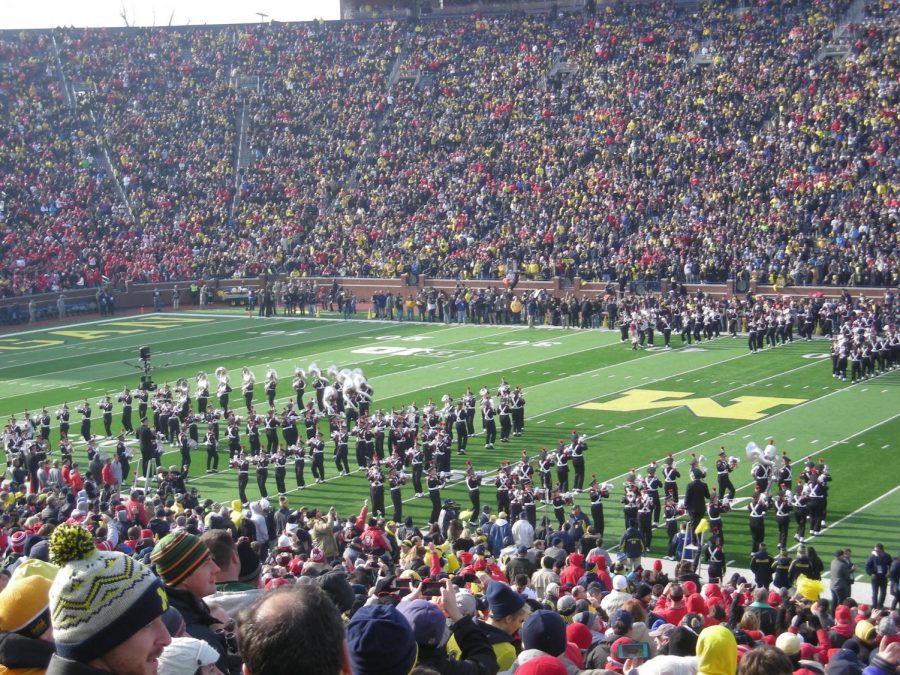 110,000 fans pack the Big House for Michigan vs Ohio State

On November 27, the Ohio State Buckeyes and Michigan Wolverines will face off in “The Game.”

This is one of biggest and most important rivalries in all of college football, with Big Ten Championship and College Football Playoff implications on the line.

“The winning team is going to the Big Ten Championship, and if they win that they are going to the College Football Playoff,” junior Henry Barr said.

Both of these teams have goals of winning championships, but they have to go through each other first.

Each team is coming into this game at 10-1 with a loss to a ranked opponent. The Buckeyes fell to the Oregon Ducks earlier in the year, and the Wolverines fell to the Michigan State Spartans a few weeks back.

“Both teams have a close loss, but they know that a win against their archrival will make the players and fans forget about that,” junior Max Crandall said.

This game means more than a regular game. Both these teams work all year preparing to face one another.

One key to the game for both teams will be stopping the opposing run attack.

“Both teams have a strong run game. I know Ohio State has a talented freshman in TreVeyon Henderson and a good backup in Miyan Williams. I have watched Michigan and I have seen that they also have two good running backs with Hassan Haskins and Blake Corum,” Crandall said.

The Buckeyes and Wolverines have had great production from their running backs all year long. Running the ball will be a major key to each team’s success. Keep an eye on Michigan running back Blake Corum who has been banged up the last two games with a lower leg injury.

Ohio State has one of the most prolific offenses in the country. Not just because of their strong run game, but they also have a Heisman candidate at quarterback.

“I saw that CJ Stroud is the new frontrunner to win the Heisman. When you combine his skillset with the talented wide receivers on the outside, it’s scary good,” Barr said.

Garrett Wilson, Chris Olave, and Jaxon Smith-Njigba are all future first round picks at the wide receiver position. Having these weapons around Stroud makes this one of the best offenses in college football.

This will be a great challenge for Michigan’s defense.

“All I have heard about Michigan’s defense is that they have two really good defensive ends,” Crandall said.

Aidan Hutchinson and David Ojabo are the defensive ends Crandall is referring to. Both are projected in the top 10 in Mel Kieper’s latest mock draft. This will be one of the most interesting matchups for the game. Ohio State’s offensive line versus these two players and the rest of the Michigan defense.

Fans from all around the country will be tuned into this game. College GameDay and Big Noon Saturday Kickoff will be in Ann Arbor previewing before the game, adding to the crazy amount of hype that this game already has.

“Obviously this is a huge game for both teams and there is a lot of hype building up to it. I think it has potential to be the game of the year,” Crandall said.

This game is always looked forward to by both teams and fans, but this year the stakes couldn’t be any higher.

“We’re going to do it, or die trying,” Michigan Head Football Coach Jim Harbaugh said in a press conference earlier in the season.