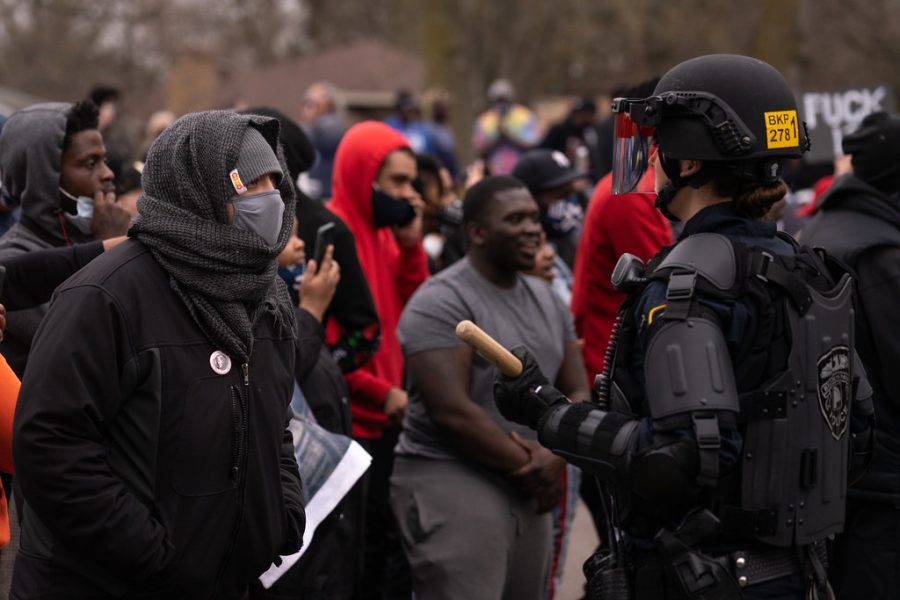 On April 11, 20-year-old Daunte Wright was fatally shot in Minneapolis during a traffic stop, less than 10 miles from where the conviction of Derek Chauvin was read.

According to Minneapolis officials, Wright was pulled over for having expired tags.  Upon further investigations, officers discovered a warrant for his arrest.  In an attempt to arrest him, Wright made a brief struggle by stepping back into his car.  Shortly following, Officer Kim Potter shot Wright.  Body camera footage shows Potter calling out a warning prior to shooting her taser.  Instead of pulling taser, she drew her weapon, shooting and killing Wright.

Two days after the shooting, Potter, who was a 26-year veteran, issued her letter of resignation to the Brooklyn Center Police Department “in the best interest of the community.”

On April 14, Potter was charged with secondary manslaughter.

Junior Emma Murphy has been following these police investigations, said she thinks this mistake requires accountability.

“Not only is it a fatal mistake that deserves to be prosecuted, but it is also something that probably would not have escalated to that point had Wright been a white man,” she stated.

While no lawsuit has been officially filed against the Minneapolis Police Department, Wright’s family is seriously considering getting justice for their late loved one.

More questions continue to arise after another fatal police shooting of an African-American man. Did this 26-year veteran truly mistake a gun for a taser or was there malicious intent behind the killing?

Brooklyn Center Police Chief Tim Gannon said, “This appears to me, from what I’ve viewed and the officer’s reaction and distress immediately after, that this was an accidental discharge that resulted in the tragic death of Mr. Wright.”

“I feel like in the past, I’ve tried really hard to make a difference and it feels like it’s not working. I know it’s not about me but these acts are so embedded into the policing system, it feels impossible to resolve,” stated Spremulli.

Others concerned about the entire system feel hopeless as well.  It seems out of reach to find any sort of solution to the senseless killings of people of color in the US.

What’s most concerning is that these actions seem to be a pattern.  Wright was stopped and killed less than 10 miles from where the verdict that convicted Derek Chauvin for killing George Floyd was read.

After the guilty verdict, activists rejoiced that this accountability foreshadows a change in the system only to learn another black man was shot and killed.

“It clearly illustrates a completely uneducated system in the police force and how people can blatantly go against everything they’ve been taught,” commented Spremulli. “This issue is systemic, not just a coincidence.”

However, resolving this system that is built to oppress is easier said than done.

When asked how the US should combat systemic racism, Murphy took a head on approach.

By enforcing education, Murphy suggests that not only do we solve the issue from the source, but also prevent its prejudice from flooding futuring generations.

Spremulli also agreed. “Throughout all of America, especially in the police force, we need to fix things that are the root of the problem. We need to work from the root and implement education in schools from young ages as well as in training,” she said.

Junior Sophia Parrino doubts the outcome of successfully implementing a solution for these systematic issues.

“I don’t know how the U.S. will combat racism because a majority of people don’t even think it exists or impacts them,” claimed Parrino.

Activists have suggested a multitude of options such as relocating money, defunding the police, or abolishing the police system entirely in an attempt to fix these systemic issues.

With education, Murphy thinks the best way to approach reform is through a more extensive training process.

“Along with better training, we need more strict psychological evaluations on police officers.” said Murphy. “If police are supposed to serve and protect, they have to prove if they deserve a gun or a badge.”