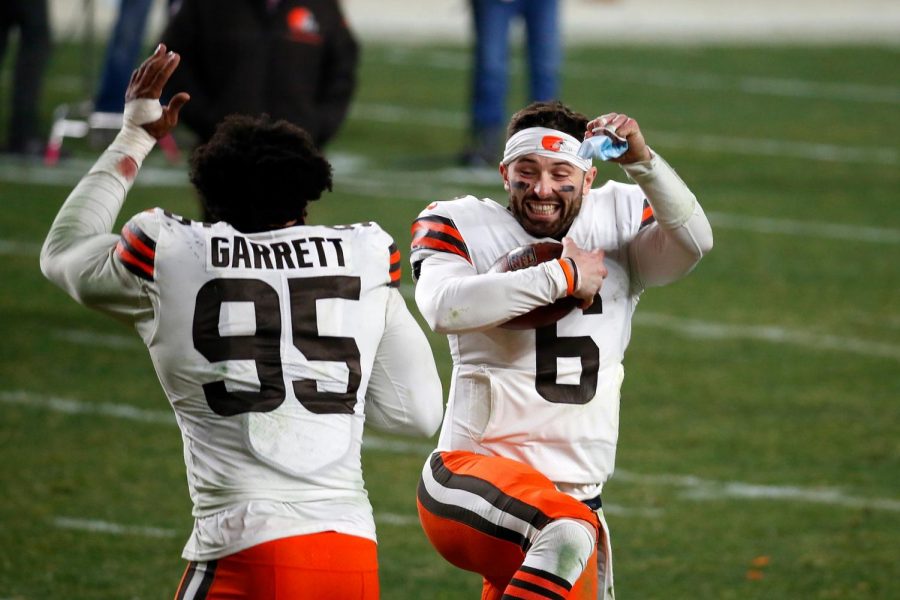 Despite a routing of the Pittsburgh Steelers in the Wild Card Round, the Browns fell to the Kansas City Chiefs in the Divisional Round.

The Browns took a devastating loss to the Chiefs, 17-22, ending an exceptional season for the Cleveland Browns.

“I thought it was a brutal way for the Browns’ season to end, but I am ecstatic about how they performed this year and I cannot wait for next year,” said Browns fanatic, senior Julius Lelonis.

The Cleveland Browns surpassed all expectations this year as they finished an astonishing 11-5. The previous year the Browns had a record of 6-10, which was a let down due to all the talent on the Browns roster. However, this season the hiring of head coach Kevin Stefanski and tremendous play from quarterback Baker Mayfield are a few of the reasons the Browns excelled.

Finishing 11-6, along with finishing sixth in the American Football Conference (AFC) earned the Browns their first playoff appearance since 2002.

“I couldn’t believe the Browns made the playoffs. They had never even come close to making the playoffs during my lifetime. Then to go and win their first playoff game, I’ve never been happier in my life,” said sophomore Max Crandall.

Despite missing key members such as star cornerback Denzel Ward and head coach Kevin Stefanski due to Coronavirus, the Browns shocked the world and handled the Steelers, 48-37. This marked the Browns’ first playoff win since 1995. On the first play of the game the Browns recovered a fumble in the end zone for a touchdown. After a hot start, the Browns never looked back and Baker Mayfield finished the game with 263 yards and 3 touchdowns.

The Browns moved on to play the defending champions, the Kansas City Chiefs in the Divisional Round.

“Everyone knows the Chiefs are one of the best teams in the league. Patrick Mahomes is one of the best players in the NFL and their offense is nearly impossible to stop,” said senior Molly Lowe.

The Browns were the underdogs coming into the game with not very many people believing in them. The Chiefs have the number one offense in the NFL and lost only two regular season games.

The Browns fought hard throughout the entire game but lost in the final minutes of the game, 17-22.

“I thought the Browns played great and really left it all on the field. They proved they can play with anyone in the NFL and showed they have the potential to become Superbowl Champions in the near future,” said Lelonis.

The Browns trailed 3-19 at halftime, with a fumble at the goal line near the end of the half the Browns looked defeated. However, the Browns fought back and when Patrick Mahomes left the game with an injury in the third quarter, the Browns came back strong. Second half touchdowns by Jarvis Landry and Kareem Hunt brought the score to 17-22. However, the Chiefs went for it on 4th and 1 with just over a minute left and converted, allowing them to run out the clock and send the Browns home.

The Browns played the game hard and closed the whole night and earned respect from fans all across the nation.

“I was content with how the Browns’ season ended. It was heartbreaking to see them so close to beating the Chiefs, but they played their hearts out and they will come back even stronger next year,” said Crandall.