A New Way of Talking 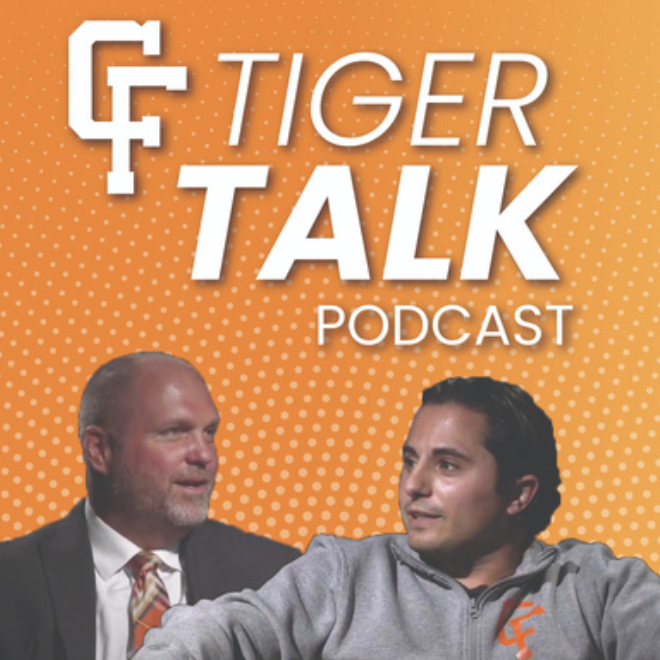 This year, to engage the Chagrin community in the 2020-2021 theme of Connected, superintendent Dr. Robert Hunt and science teacher Mr. Victor Puskas are producing a new podcast called “Tiger Talk.”

The podcast will cover many topics, not just school district related. These will also consist of community events and issues important to all residents, recognition of students, staff, and alumni.

“Last summer, I was throwing around an idea of doing a podcast with the craziness of Covid-19,” stated Dr. Hunt. “Then, Mr. Puskas actually approached me and said he’d like to put something together where we could bounce off of the teacher and administrative perspective.”

Dr. Hunt explained how he thought it was a great way to further enhance his original idea about a podcast. They reached out to Ganley Chevrolet in Aurora who agreed to sponsor the podcast and fund their equipment, which helped progress setting the podcast up.

Both Dr. Hunt and Mr. Puskas want to keep the community informed of what’s going on in our schools.

“There are some great things going on, we want to make sure we’re communicating that,” said Mr. Puskas, “It’s important to me that it’s communicated in a fun fashion, in a way people are going to listen.”

Many residents tend to enjoy listening to podcasts during their day, which allows Tiger Talk to be informative, yet entertaining.

With so much going on in people’s lives, it’s important to continue traditional methods of communicating to the public, yet provide a convenient alternative.

“We’ll still do our newsletter and things of that nature, but we are just trying to find ways to better engage people in an environment or a place they are comfortable with,” stated Dr. Hunt.

Dr. Hunt explained how they want to branch out and experiment with new ways to engage with the community.

At a time where people are seeking connections, Tiger Talk is the perfect way to bring a more personal approach to deliver information.

“If we can start to bring in more and more people, the better they are informed and the more connected they feel to our school district, so that was our whole theme this year, to get people connected,” stated Dr. Hunt.

Dr. Hunt and Mr. Puskas hope to strengthen communication with the community.

The concept of Tiger Talk began in the spring, and now the first podcast episode is underway.

“In the last month, we put a lot of planning into it. How we’re going to market it, what the format will be, just trying to get content out there,” said Mr. Puskas. “It’s been about a month of really working diligently on it and we’re hoping to get the first episode out in the first week or so.”

Dr. Hunt and Mr. Puskas have been hard at work preparing to release the first episode.

It’s anticipated that the Tiger Talk episode will be released soon.

“It’s going to be Monday or Tuesday depending on how quick we can turn it around because we’re going to record on Fridays,” stated Mr. Puskas.

The goal is to have episodes released bi-weekly, preferably earlier in the week.

Actually listening to Dr. Hunt and Mr. Puskas discuss a variety of topics that will give listeners a different insight.

“I think it gives a different perspective on who Mr. Puskas and I are personally, and it opens up for more open communication as we go forward,” said Dr. Hunt.

Tiger Talk allows for a different view on Dr. Hunt and Mr. Puskas and broadcasting news in a more personal manner.

“I’m really excited. Anytime you have an idea and it starts to get into motion, pick up steam, and you’re going to execute anything big, it’s kind of exciting,” said Mr. Puskas.

The “Tiger Talk” podcast can be found on Instagram and Twitter @Tigertalkpod. It is currently found on Spotify, but is coming soon to Apple Podcasts! Give them some support by following and checking it out.