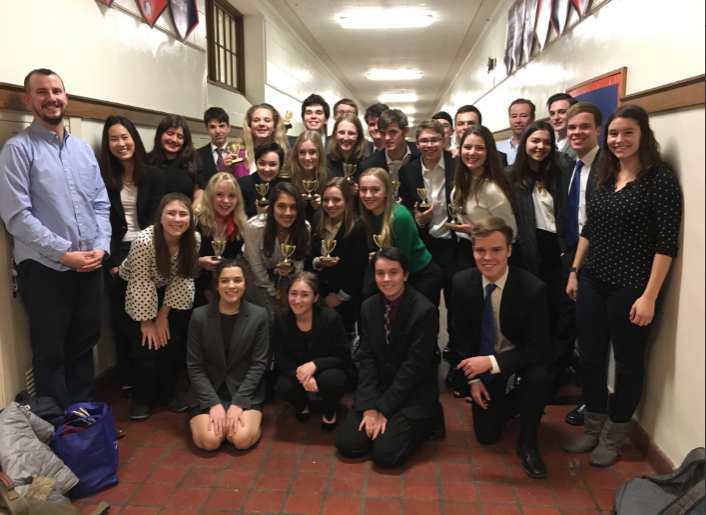 On Saturday, February 2, the Chagrin Falls Speech and Debate team competed at Berea-Midpark High School for a chance to qualify for the state tournament.

At the tournament, twelve people from the speech and debate team qualified, and two more were named alternates. Two more qualified later at the district national qualifying tournament.

Robert Snider, a junior at CFHS, is looking forward the tournament.

“I’m very excited; since the competition is so difficult, I’ve lifted the pressure off of myself so now I’m just excited to compete and see friends,” Snider said.

Snider, going on his third time around feels more comfortable this time around, but is still feeling a bit nervous.

“I am nervous because each time my expectations for myself get higher and my competition changes,” Snider finished.

On Saturday, March 2, Snider, as well as eleven other students will travel to Jackson High School to have a shot at being the State Champion.

At this state tournament, competitors from all seven speech districts in Ohio will be participating, making this a difficult tournament to win, according to junior Claire Lordan.

“The competition is going to be pretty tough. While I would say our chances of winning states are pretty much none, we are super excited to go and compete with the best in the state,” Lordan said.

Though Lordan and her partner, junior Mary Frances Mahoney, had the odds against them late in the season, they worked diligently to earn a spot in the state tournament.

Midway through the season, Lordan and Mahoney changed their script to allow for a more effective approach at their dramatic piece.

“I absolutely think reworking our script played a huge part in us winning the state qualifying tournament,” Lordan said. “Having a script that you can adapt and grow with throughout the season is crucial to its success. It leaves room for you to try out new ideas as they come to you,” Lordan finished.

Lordan and Mahoney’s flexibility in their script gave them to first place in duo interpretation at the tournament.

Overall, the Chagrin Falls Speech and Debate team had many individual triumphs that led to a great team showing at the state qualifying tournament, and will be gearing up for a successful run at states on March 2.