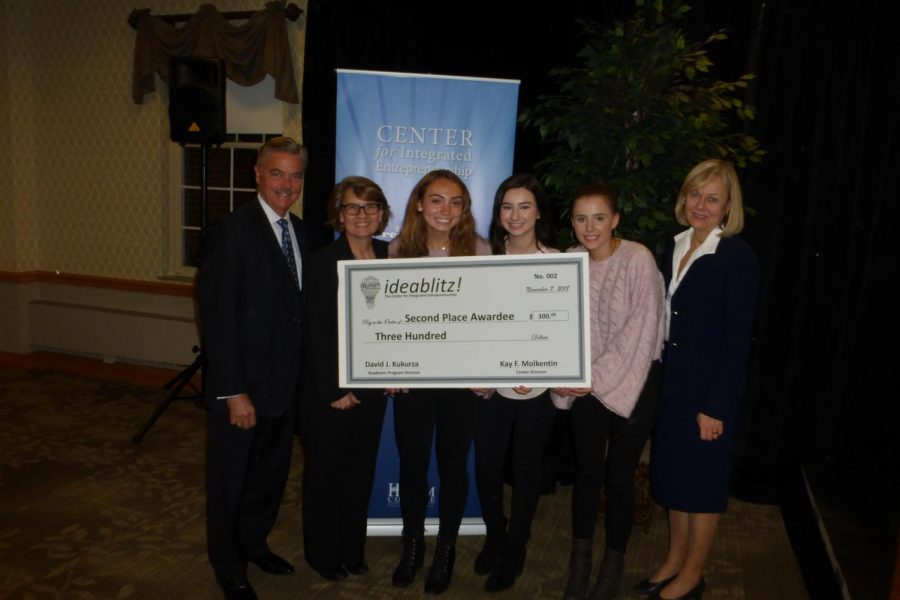 The ideablitz! is a venue for Hiram College students, as well as the Chagrin Falls students who are in the Hiram college credit plus program, to build and present new and inventive ideas. Each team develops a concept, and gets six minutes to present to a panel of five judges.

“The ideablitz! fosters creativity and collaboration,” said Chagrin Falls business teacher Mrs. Vondrak. “All students did a great job with their ideas, and going through with entrepreneurial mindset,” Vondrak said. “They put in a lot of work.”

Along with the four other CFHS teams, nine teams from Hiram College participated in the event.

Overall, participants in the ideablitz! enjoyed a good challenge in creating a project while competing against others.

“I enjoyed the ideablitz! because it was fun hearing other ideas outside of the classroom,” said junior Winston Breeden. “It was also fun because we won.”

In the ideablitz!, Breeden’s team came in third place, receiving a $200 prize.

What made this convention unique was the creativity of  the other participating teams.

During the competition, senior Katarina Lechman witnessed one team created an idea of a interactive alarm clock that requires the user to stand on it in order to silence it.

“I thought it was a creative approach to solving the issue of snoozing your alarm and falling back asleep,” Lechman said.

Ideas like this displayed the mass amounts of creativity in this entrepreneurial showcase.

Aside from the other teams ideas, seniors Emma Vaccaro, Lisa Nazelli, along with Lechman designed an ingenuitive clothing app.

“Our idea is a clothing and online shopping app in which the user builds a profile with body measurements, style preferences, favorite stores, etc.” Lechman said. “These filters are then applied to searches so that everything they find is available in their size and colors at nearby stores,” Lechman stated. Another feature to the design is the app allows the user to scan items from their closet and have the app build outfit choices using an algorithm.

Many business invention ideas come as an inspiration from others. However, senior Steven Kruszenski pioneered the team’s original idea of a fashionable money clip that has a GPS and tracking capability, including a lifetime battery so users never have to cancel credit cards or get a new ID again.

“Steven Kruszenski came up with the idea because two weeks prior to the idea blitz he lost his wallet, which posed to be a huge hassle,” Breeden said. “However, WalTrak is based off everything that is wrong with the popular Tile tracker. That includes incorporating GPS, a kinetic battery, which lasts for a lifetime whereas Tile connects to phone via bluetooth and its battery only lasts for a year,” Breeden concluded.

Overall, two out of the four ingenuitive teams in total from Chagrin Falls High School that participated in the idea blitz came in the top three, taking in over $500 in prize money in total for their creative and unique ideas, helping the young students of Chagrin Falls make a name for themselves in the business field.